Being Natural: An Environmental Biography of Marston Bates

My second book project draws on the life and work of biologist and environmental writer Marston Bates (1906-1974) to chart a path through a succession of attempts by U.S. actors to exert control over environments and people in the developing world through the 20th century, as well as examining an array of critiques of such projects. During the 1920s through 1940s, Bates worked as an applied entomologist. He studied crop pests, malaria, yellow fever, and mosquito ecology for the United Fruit Company and the Rockefeller Foundation––two major forces in reshaping global landscapes of agriculture and health during the twentieth century. In 1952, he became a professor of zoology at the University of Michigan and turned to writing on nature and science for general readers. Publishing over a dozen books, he helped to bring the concept of “ecology” to a broad audience. But he was not merely a popularizer of contemporary scientific ideas. Commenting on problems of economic development, conservation, and global population growth, he presented a critical vision of what would today be labelled “sustainable development.”

Thus, while Bates began his career serving U.S. government and corporate interests, during his later life as a public figure, he criticized dominant modes of development and worked to suggest alternatives that he viewed as more humane, democratic, and scientifically-informed. This work is apparent not only in his prolific writings, but also through such efforts as his role in organizing the highly influential 1955 Chicago conference on “Man’s Role in Changing the Face of the Earth” and the 1959 Darwin Centennial, as well as consulting on post-Sputnik education reforms and population control programs. For this reason, his biography opens a window not only into significant public debates, but also into the formation of U.S. policy toward science and the global environment at mid-century––a key period of transition in both environmental thinking and the U.S. role in the world.

My research for this project has been supported by a Bordin/Gillette Fellowship at the Bentley Historical Library of the University of Michigan, a  Rockefeller Archive Center grant, a COLA College Research Fellowship, a Special Research Grant through the Office of the Vice President for Research, and a History Department Scholarly Activity Grant. 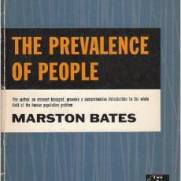